It was a lovely Friday and on this Friday there was a man who had a very important presentation at Work for his company! The man woke up early, showered, ate a good breakfast, reviewed his notes and left the house for this important meeting!

Right as the man is backing out of his drive way a car goes flying past him and nearly clips him. He suddenly stops, becomes irate and begins swearing at the car! (Truth is he’s swearing at a car, because the driver that cut him couldn’t hear him and he didn’t care as he was focused on not being late to his job.) Now as the man starts to regroup he’s refocusing on his work task, landing his company this account would be huge for him. As he’s at a red light and it turns green the man is then cut off by a driver in a rush to get to their destination, the man stops focusing on his presentation he tails the driver that cut him off, flipping them off in the mirror and doing other obscene gestures.(The car that cut him off was in a rush to get their kid to school on time. Wasn’t paying attention, just seen the light turn green, so they weren’t focused on the man that was cut off.) The man tries to regroup but is still angry about these two situations that didn’t kill him, hurt him, or even make him late for work. Now he gets to work and is trying to remember his presentation but still distracted by these things that don’t matter.

The account holders and the company boss come in for the presentation and as the gentlemen is presenting he’s short with his words, discombobulated, and doesn’t seem confident in what’s he’s saying. The account holders turned down the deal offered and decided to go with the companies competitors!

(The enemy used two people that weren’t focused on doing anything personally to the man to knock him down and lose the account for his company! The man was prepared, left early and was thrown off by two people that went on with their day. While he still has to live with losing the accounts not because he wasn’t prepared but because he let the world throw him off course! If the Man would of remained focused on God I see more than Two reasons to give thanks by time he even gets work, which would have kept him in the peaceful spirit he needed to remain calm and himself. He woke up, thank you God. He was able to eat breakfast, thank you God. He had an opportunity in which he had the time to prepare for work, “Thank you God. I have a job.”Then he’s backing out and doesn’t get hit which could have been bad, Thank you God. He gets cut off, but is ok! Thank you God I didn’t clip him. He makes it to work on time, Thank you God I made it.)

Where I come from is where people want to go! Think about what I just said, I come from God so Heaven is the goal! …

Trusting God in the “Now What?” Although we plan things out the Lord is the one who orders our steps. Free will is the choice… 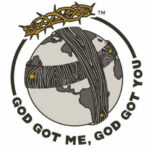